We are proud to update you about the recent VVans Activity, i.e., Career Guidance Week 2009.

As most of you might know, CGW is an annual programme of our association, aimed at educating the students of tenth standard about the various career options available to them. The idea is to get the experts from various fields and provide the students with a brief overview of their field so that they can be aware of some of the less known important careers as well as be more informed about the more probable careers they might take up.

We are pleased to inform you that this year’s CGW, the second consecutive year was a great success as well. With around 14 speakers speaking about different career options, the programme was highly informative and interesting.

Here is a brief review of the 6-day long programme. 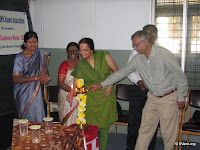 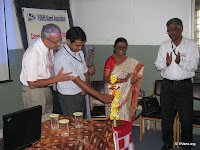 The program started with an inauguration presided by Smt. B.S.Vijaya, Hon. Headmistress, VVSHS; Mrs. Shakuntala haldipur, Mr. Prakash & Mrs.D.M. Shobha, Directors, Chord Road Hospital, Dr.Deepak Haldipur & Dr.Ganesh Ashwath, Promoters, VVans, along with an invocation by the students of tenth standard. The set of talks began at 4.15 pm
Mr. Santosh C.S., promoter of VVans and co-organiser of CGW-09 spoke about the Association and introduced the students to the programme in his talk. 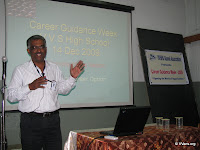 Following this, we had Col. Raveendranath, a Retired Indian Army Colonel, a Kargil war veteran & Vir Chakra recipient, who spoke about careers in defense services. It was a great honor and privilege to have a speaker of this cadre interact with the students. The colonel’s talk was vibrant and impeccable and the students actively interacted with reverence. 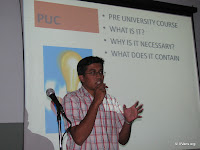 Mr.Dheeraj Shyam V.N, VVSHS alumnus, and a third year medical student at Bangalore Medical College, who stood 11th for the state in CET spoke about Pre-University Courses, wherein he gave detailed information about the science & commerce related courses in pre university education. He also answered a number of questions from the enthusiastic audience. The program got off to an astounding start exceeding everybody’s expectations. 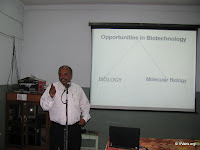 The first speaker for the day was Dr. Purushottam, an alumnus of our school, who spoke about Biotechnology and biological sciences. His talk was highly informative and motivating and was extremely well received by the students with a lot of questions being answered by the speaker. 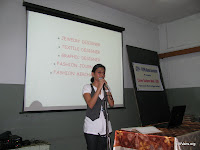 Following which, we had Ms. Radhika, a pass-out of NIFT (National Institute of Fashion Technology) and currently working as a designer for an export house talking about fashion designing and fashion industry. The talk was motivating and informative, and very well received by the students. 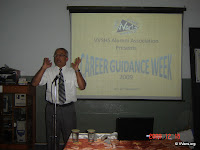 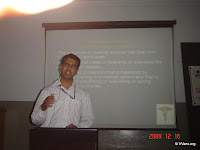 The first topic for the day was Careers in the field of Medicine, taken up jointly by Dr. Ganesh Ashwath & Dr. Deepak haldipur, both being Alumni of our School. Dr Ganesh spoke about the life in medical schooling and in the initial years whereas Dr. Deepak spoke about the life as a Doctor in the society. Dr. Deepak was arguably one of the most motivating speakers of the programme. Mention was also made about the Para-medical fields as well.
This was followed by a talk about Journalism by Mr. N.S. Shankar, a freelance journalist and a well know writer. His talk was motivating and well received by the students as well. He took special care to talk about various options in journalism including the electronic media 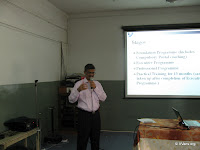 Commerce was the first topic of the day, taken up by Mr. Devendra Nayak, an alumnus of our school, currently working as a Chartered Accountant in Bangalore. His talk about commerce was a very well prepared one covering all the traditional as well as the modern courses in Commerce. 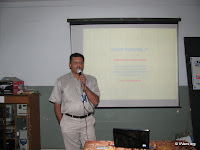 Following which, Mr. Subhash, also an alumnus of our school spoke about careers in Non-IT engineering. 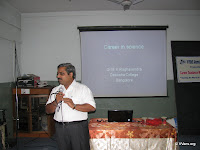 The first speaker for the day was Dr. Ragavendra, a physicist who spoke about various careers in pure sciences. Arguably it was the most informative and enlightening talk as he went on to tell about various scholarships and premier institutes for science & research which were not known to most people seated there. 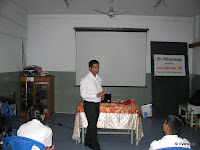 Following this we had Mr. Amit Mandagi, a lawyer, with a post graduate degree in international law from London speaking about various aspects of being a lawyer. With his anecdotes and examples, he surely impressed a lot of students. 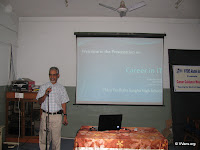 The last day of our programme, was started off by Mr. Rajendra Guttal, CEO, Webcetra solutions, who spoke about the various aspects if IT industry. It was a very informative session for the students and they had a clear idea about the sub-divisions and finer details of the field. 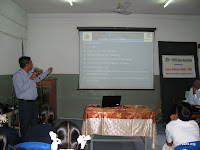 After this, we had Mr. N. Satyaprakash & Co., talking about various vocational/ job oriented courses, like polytechnics, and some of the newer courses, started by the government, which students could go into after tenth standard or second PUC.
Following this, we had a talk about Fine arts by Mr. Ragavendra & Co., who talked about various aspects of fine arts, careers in the feild, including the modern day transitions like animation industry. 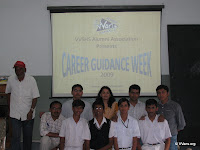 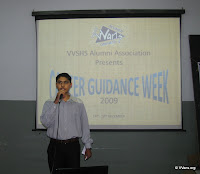 The week-long programme concluded with a vote of thanks by Mr.Santosh C.S. We also presented a token of appreciation to all the present students who helped us out voluntarily to conduct the programme.

Sangama 2011
- A mega re-union of all the alumni & teachers of VVSHS. Held on October 9th at VVS Campus.

Educational trip for the students of Saneguruvanahalli High School
- A reach-out initiative of VVans Sankalpa, the second edition, held on Aug 17th 2011

We Are Now REGISTERED

New Photos in our Galery